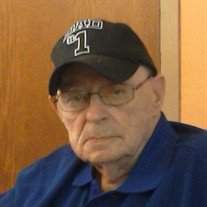 Born in Peoria to the late Thomas and Cleo Forbes Kepper, he worked at Caterpillar for 30 years as a storage control man retiring in 1994. He was a member of UAW 974 and of the Catholic Faith.

He later married Judy Cox in 1981 and had Jesse (Michelle) Cox of Washington.

Services for Tom will be held on Monday August 31 at 1pm at Lenz Memorial Home in Lacon. Visitation will be held on Sunday from 4-6 pm also at Lenz. Memorials can be made to the family. Online condolences can be left at lenzmemorialhome.com


To send flowers to the family or plant a tree in memory of Thomas F. Kepper, please visit our floral store.

Please click here to view the video tribute
To send flowers to the family in memory of Thomas Kepper, please visit our flower store.