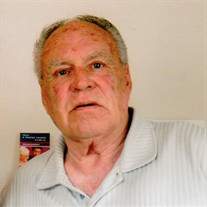 Thomas E. Smith, 75, of Lacon, passed away September 18, 2017 at the Richard Owens Hospice Home in Peoria. Tom was born in Bloomington on June 30, 1942 to the late Carroll and Arlene Wilson Smith; he married Josephine Harvey in 1966. She passed on October 29, 2013.
Thomas survived by: his daughters Kimberly (Danny Pettett) Smith of Lacon, Stacy Smith of Lacon; sister Billy (George) Gibson of Bloomington; grandchildren Dylan Smith, Aaron Smith & Bryce Pettitt all of Lacon, Jenna Smith of Streator; One niece; and one nephew. He was also preceeded in death by his son Tony Smith and nephew Billy Gibson. Tom was an outdoors kind of guy, he enjoyed fishing, camping, cookouts, and riding snowmobiles with family and friends. He loved to go the Krus's Auto Repair shop and visit with all the guys.
In the sixties Tom ran Tom's Texaco in Lacon, later working for T & A Disposal Company, and as a foremen at ITI. He was a Lacon - Sparland Fireman for many years, which grandson Aaron follows in his footsteps, and in the Marshall County Civil Defense.
A celebration of life will be held at 1pm on October 7th 2017 at the home of his daughter Kim in Lacon. Memorials may be made to the family or the Lacon-Sparland Fire Department. Online condolences can be left at lenzmemorialhome.com

To send flowers to the family or plant a tree in memory of Thomas E. Smith, please visit our floral store.

To send flowers to the family in memory of Thomas Smith, please visit our flower store.