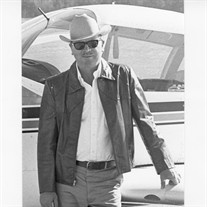 Vernon F. Budd, 83, of Lacon, died on January 1, 2019 at his home. Born in Harrison, MI on June 28, 1935 to the late Carl and Florence Deneen Budd, he married Charline Cross on April 3, 1959 in Emden IL. Vernie served his country in the Army and was an Illinois Riverman of more than 50 years. He operated Deneen River Company with his father Carl and brother Melvin for over 35 years. He was a lifelong antique collector and restored several antique cars including a Model T Depot Hack. He used the Model T to chauffeur the Mayor of Lacon in the annual Old Settler's Celebration Parade. Vernie was a private pilot with more than 2000 hours flying time and held a Western Waters Tugboat Pilots license for over 40 years.
Vernie is survived by his wife of 59 years, Charline; daughter Connie (Richard) Collins of Chillicothe, sons Nicholas (Nancy) of State College PA, Michael (Mary Ellen) of Devon PA; Brothers Melvin (Justine) of Lacon, Ronald (Darlene) of Lincoln; sister-in-law Chris (late Jay) Budd of Venice FL; grandchildren Nicole (Jason) Albers, Steven (Carrie) Urnikis, Michael Carl Budd, Timothy (Phyllis) Herzing & Eric Herzing, and nine great grandchildren. He was preceded in death by his brother Jay.
Services will be held on Friday, January 4 at 11 AM at Lenz Memorial Home in Lacon with Linda Strader officiating. Visitation will be held one hour prior to the service. A private family burial will be in the Lacon cemetery following the services and memorials can be made to the Michael J. Fox Foundation for Parkinson's Research or Lacon Sparland Ambulance. Online condolences can be left at lenzmemorialhome.com


To send flowers to the family or plant a tree in memory of Vernon F. Budd, please visit our floral store.

Please click here to view the video tribute
To send flowers to the family in memory of Vernon Budd, please visit our flower store.