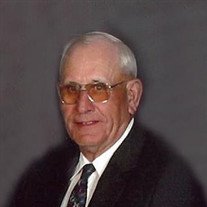 Vernon E. "Gene" Watkins of Henry, formerly of Lacon died at his residence on December 1, 2014 at 4:00 am. Born on May 23, 1933 in Emden, IL to the late Vernon and Mary Eeton Watkins, he served his country in the Army during the Korean War. Vernon married Judy Olson on November 29, 1959 in Buda, IL. He was a lifetime farmer who enjoyed raising Belgian Draft horses and owning and operating Watkins Trucking.

He was also preceded in death by two brothers, Art and Dean; one sister, Anna Sanders; and his son, Dennis Watkins. The family gratefully acknowledges the comfort and care given to Gene by the staff at Heartcare Midwest.

Memorials can be made to HOI Down Syndrome Association, Cystic Fibrosis Greater Illinois Chapter, or his church. Online condolences can be left at lenzmemorialhome.com.

To send flowers to the family or plant a tree in memory of Vernon "Gene" Watkins, please visit our floral store.

Please click here to view the video tribute
To send flowers to the family in memory of Vernon Watkins, please visit our flower store.