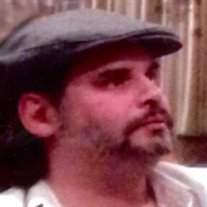 Walter "Tom" Pence of Lacon, formerly of Douglas, Alaska died at 4:15 pm on June 20, 2014.
Born September 2, 1965 in Peoria to Sherry Ann Pence, he is survived by her in Lacon and his brother, Tim (Cassandra) Pence of Vancouver, WA. Also surviving are Uncles Harold Pence of Juneau, AK; Jim (Lennie) Pence of Reno, NV; and nieces Brianna and Lexi.
He was preceded in death by his grandparents Dota and Lois Brown.
Tom was raised in Alaska, growing up with a love of the wilderness and the adventures to be had there. He also was an avid reader, always carrying a book to make a wait more pleasant.
Cremation rites have been accorded. We will celebrate Tom's life at Club Lacon in Lacon on Thursday, June 26 at 6pm. His ashes will be scattered on Douglas Island, Alaska. Memorial contributions can be made to the family. Online condolences can be left at lenzmemorialhome.com

To send flowers to the family or plant a tree in memory of Walter "Tom" Pence, please visit our floral store.

To send flowers to the family in memory of Walter Pence, please visit our flower store.