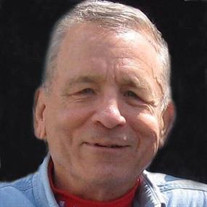 A memorial visitation will be held on Saturday, April 23, 2016 at 10:00 am at the Varna United Methodist Church, followed immediately by a memorial service at 11:00. Reverend Mike Barclay will officiate. A luncheon at the church will be provided following the service.

Born on January 29, 1939 in LaHarpe, IL, he was the son of Lyell Claire Bivens and Breta Mae Harden Bivens. At the age of one, he was diagnosed with a Wilms tumor with no hope for survival. His parents found treatment for him, resulting in a long and abundant life with only one kidney. In recent years, doctors told him he was a medical miracle.

Ward professed faith in Jesus Christ and was baptized on March 13, 1949 at Tiskilwa Baptist Church. In recent years, Ward was active on the trustee board of the Varna United Methodist Church, where he attended for 36 years.

Judith Jean Harrison was his high school sweetheart, and they married on June 1, 1958 at the Tiskilwa Baptist Church. After 58 loving years, she survives. Together, they have two sons: Scott (Teresa Lewis) of Long Grove, IA; and Steven (Kathy Varboncouer) of Kankakee, IL. They have five grandchildren: Kendra, Kirsten, Brandon, Chad and Kelsey. Kirsten was born on his birthday, and he passed away on Kelsey's birthday.

Also surviving are his sister, Iris Bivens Schultz, and his brother, Jon (Linda) Bivens, and several nieces and nephews. He was preceded in death by his father and mother.

Ward served in the United States Air Force from 1956-1960 before entering the University of Illinois, where he graduated in 1963 with a Bachelor of Science in Electrical Engineering. He went on to get his Master of Science in Electrical Engineering at Bradley University while working at Caterpillar, Inc. as an electrical engineer. He retired after 35 years. He was a registered Professional Engineer in the states of Illinois and Ohio and held several patents. He was a member of the Institute of Electrical and Electronic Engineers. Being a lifelong learner, Ward continued education throughout his life, enrolling in distance college courses in recent years. Both sons followed their father's footsteps by graduating as engineers from the University of Illinois.

Some of Ward's interests were gardening, hobby farming, traveling, "gadgets and tinkering," computing, inventing, and a daily fitness regimen that gave him quality of life through many health challenges.

Memorials may be made to the Varna Methodist Church Community Fund. Online condolences can be left at lenzmemorialhome.com

To send flowers to the family or plant a tree in memory of Ward Leroy Bivens, please visit our floral store.

Please click here to view the video tribute
To send flowers to the family in memory of Ward Bivens, please visit our flower store.