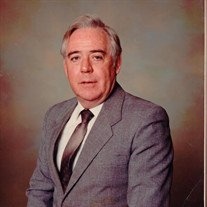 Warren "Bill" Green, 87, died Monday, May 7, 2018 at Perry Memorial Hospital in Princeton. He was born October 6, 1930 in Sarcoxie Missouri to the late William and Margaret Blackburn Green, he served as an Airman First Class in the United States Air Force during the Korean War. He married Jeanetta Vincent on October 18, 1952 in Arkansas. In 1967 W.R. Grace, Joplin Mo. Plant, transferred him to their new plant in Henry as their plant manager he retired after 37 years. He then went on to work for Farmland as terminal manager for five years.
Bill enjoyed hanging down by the river chatting with his river buddies and spending time with his family and grandchildren. He enjoyed hunting and fishing and working on cars. Later in life he loved Reading his family's posts and pictures on Facebook, playing solitaire and his morning ritual of having coffee with his eldest granddaughter and caretaker Kirsten Frawley. He was a devoted Cub Fan and a Bears Fan. He will be greatly missed.
Bill is survived by his wife Jeanetta, two sons, Mike Green of Lacon, Steven (Penny) Green of Henry, daughter Janet Green Endress of Chillicothe, sister Joyce Miller of Springfield Missouri, eight grandchildren, and 14 great grandchildren. He was also preceded in death by sister Georgia Green.
Cremation rights have been accorded and a memorial service was held Thursday at Waterworks Park in Henry. Memorials can be made to the Henry Ambulance and online condolences can be left at lenzmemorialhome.com

To send flowers to the family or plant a tree in memory of Warren "Bill" Green, please visit our floral store.

To send flowers to the family in memory of Warren Green, please visit our flower store.