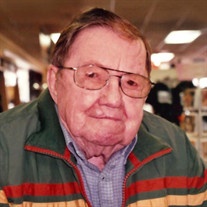 Bill worked in the lumber industry for over 50 years, working for local yards such as Miller Lumber and Allen Lumber. Bill was also part owner in B & D Lumber, Past Post Commander for Walter Guede American Legion Post #593, a lifetime 15 Club member, former president of Lacon Businessmen's Association, and a member of Put-Mar-Wood Association.

Cremation rites have been accorded and a graveside service will be held on Saturday, September 19 at 9 am at the Lacon Cemetery with Bob Murphy officiating. Memorials can be left to the charity of your choice in his name. Online condolences can be left at lenzmemorialhome.com.

To send flowers to the family or plant a tree in memory of William H. Guede, please visit our floral store.

Please click here to view the video tribute
To send flowers to the family in memory of William Guede, please visit our flower store.