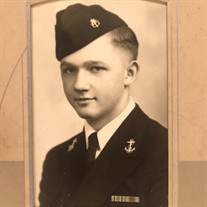 William F. "Bill" Kemnitz, 93, of Melbourne, Fla., formerly of Varna, Ill., passed away on July 20, 2020, at Viera Hospital in Melbourne, Fla. He was born in Varna on January 8, 1927, to the late Fred and Elfrieda (Junker) Kemnitz. Bill married Mary Lundberg on August 13, 1949. She preceded him in death on January 21, 2015. He was also preceded in death by his brother Robert and sister Betty Floden.
Bill is survived by his son Michael (Lorna) of Virden, Ill., his daughter Debra (Charles) Beatty of Melbourne, Fla. and granddaughters, Amanda & Angelica Beatty.
Bill was a veteran of the Navy. He held positions as a high school teacher, a TV Broadcast engineer/camera man and for 30 years he was a computer maintenance instructor. He was also an avid local historian at the Marshall County Historical Society and a member of Saint Paul Lutheran Church.
A funeral service will be at 11 a.m. on Wednesday, July 29, 2020, at Saint Paul's Lutheran Church in Varna. Visitation will be held one hour prior to the service at the church. Burial will be in Saint Paul's Lutheran Cemetery.
Memorials may be made to Saint Paul's Lutheran Church in Varna. Online condolences may be left for Bill's family at lenzmemorialhome.com


To send flowers to the family or plant a tree in memory of William F. Kemnitz, please visit our floral store.

To send flowers to the family in memory of William Kemnitz, please visit our flower store.