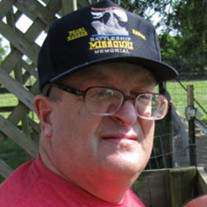 His funeral services will be at
11:00 a.m. Saturday, February 23, 2013 at First Baptist Church,
Bloomington. Visitation will be for one hour prior to services on
Saturday at the church. Burial will be in Park Hill Cemetery
Bloomington,IL. Memorial contributions may be directed to Beverly
Farm Foundation, 6301 Humbert Rd., Godfrey, IL.

William was born November 8, 1950
in Normal a son of Leonard A. and Barbara Bunting Janke.

He was preceded in death by his
parents, a brother, Paul and a brother in law Robert Nichols.

He was a member of the First Baptis
Church, Bloomington and was involved with the McLean County
Crippled Children's Camp thru Easter Seals. Bill was also the
"assistant" coach for Illinois State University Men's Swimming.

Online condolences may be sent to
his family at kiblerbradyruestman.com.

To send flowers to the family or plant a tree in memory of William L. Janke, please visit our floral store.

To send flowers to the family in memory of William L. Janke, please visit our flower store.