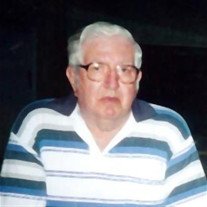 He enjoyed deer and pheasant hunting, bowled in leagues, and belonged to the local euchre club. Bill went to Branson and also took bus trips with Norma and friends. Most of all he enjoyed a cup of coffee, talking with friends, and a game of crazy 8's with Norma almost every morning. Touring around town on the golf cart was also a favorite pastime.

He was an Army Veteran that served in the Korean War.

Bill's life gave him many jobs as a farmer, construction worker, and a stint making boats at the sea sled factory. He then spent 26 years at Caterpillar retiring in 1992.

He was also preceded in death by his son Rick, brother Mearl, and brothers in law Jack Yepsen & Jackie Fervier.

Services will be held on Monday, July 6 at 11 am at Lenz Memorial Home in Lacon with a visitation on Sunday from 3-5 pm also at Lenz. Cremation rites will be accorded and a private burial will be at a later date in Lacon Cemetery. Memorial contributions can be made to American Legion Post 593. Online condolences can be left at lenzmemorialhome.com.


To send flowers to the family or plant a tree in memory of William L. McCully, please visit our floral store.

Please click here to view the video tribute
To send flowers to the family in memory of William McCully, please visit our flower store.