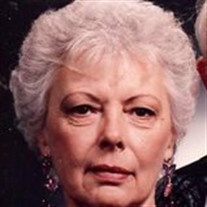 Wynona "Cap" McVeigh 75 of Lacon, died on July 11, 2014 at 9:59am at OSF St. Francis in Peoria. She was born on September 4, 1938 to the late Millard and Irene James Williams in Colorado Springs, CO; she married Charles McVeigh on September 18, 1969 in Peoria.
Being a superb decorator, Cap successfully built and operated Wynona's Draperies for over 30 years. She was passionate about being active in her community and nurturing others. Over time she served on the boards of the Lacon Chamber of Commerce and Lacon Retailers, volunteered on the Lacon Sparland Ambulance Service, and fondly played Mrs. Claus and the Easter Bunny for many years. Cap was also well known for her involvement in The Old Settlers celebration helping resurrect this local tradition to where it is today.
Not only was she a successful business woman, she was a wife, mother, and the Matriarch of her family. She gave unselfishly of herself, taking care of all the details in life. From the time her own father called her "Cap" or "Captain", she has been in control, tirelessly making sure all have their sails set straight. Her love was unconditional.
Cap is survived by her husband Charlie of Lacon; daughters Kelly Caldwell of Lacon, Cheri (Ron) Coletrain of Sparland and Kathleen (Jim) Cox of Rose Hill KS; grandchildren Karen Littleton, Vanessa Coletrain, Zach Coletrain, Jesse Powers, Rebecca Kilpatrick, and Jennifer Diven; and 5 great grandchildren. She was preceded in death by her father Millard, her parents Paul and Irene Culp, and her son Kevin McVeigh.
A visitation will be held on Tuesday July 15 from 5-7pm at Lenz Memorial Home in Lacon. Cremation rites will be accorded and a private family inurnment will take place at a later date. Memorials can be made to the Marshall County Old Settlers Association or the Lacon Sparland Ambulance. Online condolences can be left at lenzmemorialhome.com.

To send flowers to the family or plant a tree in memory of Wynona "Cap" McVeigh, please visit our floral store.

Please click here to view the video tribute
To send flowers to the family in memory of Wynona McVeigh, please visit our flower store.