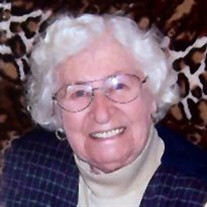 Yvonne Flick, 97, of Lacon formerly of North Riverside, IL died on Thursday June 26 at 9:40 am at St. Joseph's Nursing home in Lacon. Yvonne was born on January 11th, 1917 in Stonington, IL to the late August and Philomene Wattelet Poiriez. She married Alfred Flick on July 6, 1937 in La Porte, IN. He preceded her in death on August 26, 1994.
Yvonne gardened into her 90's and shared plants with many neighbors and friends. She was an expert needle woman, creating many works of crotchet and stitchery.
Yvonne is survived by her daughters Arlene Calpino of Lacon and Alfreyda Flick of Dowelltown, TN; son Alan Flick of Boiling Springs, PA; 16 grandchildren; 25 great grandchildren; and 3 great-great grandchildren. She was preceded in death by her parents, husband, sons Alfred Jr. and August, grandson Jordan Anderle, great grandson Joshua Anderle, and sons-in-laws Gustave Anderle and Tom Calpino.
Private family inurnment was held in the Old Stonington Cemetery in Stonington, IL. Memorials can be made to the Lacon Public Library Large Print Book Fund. Online condolences can be left at lenzmemorialhome.com

To send flowers to the family or plant a tree in memory of Yvonne Flick, please visit our floral store.

To send flowers to the family in memory of Yvonne Flick, please visit our flower store.